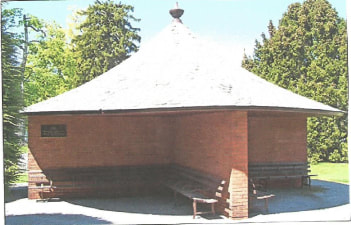 Many years ago, Poughkeepsie, like many other cities in America, had a trolley system with tracks that ran down the main streets. The trolley waiting shelter immediately north of the Poughkeepsie Rural Cemetery’s main entrance is a relic from that. Constructed of red brick with a wooden shingle roof the circular structure with its built-in benches was used as an outdoor waiting room for those who needed to get on the trolley to reach work, home, go shopping, to school, worship, etc.  The shelter is now most visible given the necessary revamping of the cemetery’s main entrance landscape and is an incredible sight that had been hidden by large dense hemlocks.

At some point in his multi-faceted and diversified business career, James W. Hinkley, Sr., of the estate Eden Hill on the south end of the city of Poughkeepsie, purchased the old Poughkeepsie City Railroad Company. He then organized the Poughkeepsie City and Wappinger Falls Railway Company. He served as president until death in 1904 at age 53.

Previous to this he had edited and owned the News-Press of Poughkeepsie and later the Daily Graphic in New York City, which was the first illustrated daily newspaper in the world. Both were pioneers in the field of journalism, employing women in their editorial departments as early as 1883. Perhaps Mr. Hinkley became emerged in transportation after having become involved in the operation of an electric manufacturing company which made motors and generators. This was The Walker Company, which Westinghouse Company later purchased. We can only surmise this could have been.

Upon purchasing the Poughkeepsie City Railroad Company, horse-drawn trolley car service ran along the tracks in the city of Poughkeepsie. They were later electrified and an expansion of track was made to the north and south of the city. The Wappingers Falls line began running October 1, 1894. Modern urban growth became possible and successful with help from the trolley system. Until World War I, the lines grew and bustled. However, that growth eventually stopped when bus service began in October 1928, quickly taking the place of the trolleys.
​
Mrs. Mary Hinkley, wife of James W. Hinkley, donated the trolley waiting shelter at the cemetery. Many, but not all, of the riders who got on or off from the cemetery were workers at the cemetery who lived in Wappingers Falls. Today the shelter has been restored with funding provided by The Friends of the Poughkeepsie Rural Cemetery. We may never again hear the “clang, clang, clang” of the trolley, but we can sit in the trolley waiting station remembering nostalgia of the past while enjoying the beauty of the Poughkeepsie Rural Cemetery, once a stop on the local trolley.