Reflections on The First Interments; Little Flowers Gone Too Young, But Not Forgotten by Ginny Buechele

Reflections on The First Interments; Little Flowers Gone Too Young, But Not Forgotten
Ere sin could harm, or sorrow fade,
Death came with friendly care;
The opening bud to heaven conveyed,
and had it blossom there.

This lovely bud, so young, so fair,
Called hence by early doom,
Just came to show how sweet a flower
In Paradise would bloom.

There in the Shepherd’s bosom,
White as the drifted snow,
Is the little lamb we missed one morn
From our household flock below.

So the bud of our bosom fluttered up to the dawn,
A window was opened – our darling was gone!
A tenant from time, from fears, and from sin,
For the Angel on watch took our little flower in.
[Author Unknown]

Poughkeepsie Rural Cemetery “was dedicated with solemn and appropriate ceremonies to the sacred purposes for which it is used” on November 2, 1853. (The Rural Cemetery, 40 years Since It Was Dedicated To Its Present Uses; The Courier; Poughkeepsie, N. Y., August 27, 1893) In the same article The Courier also reported 9,000 interments within the cemetery boundaries.

In locating this 1893 article, this writer found her interest peeked.  This article was the impetus to research further regarding the first interments in “The Rural Cemetery”.

As near as can be determined from: cemetery office records which note William Bodden as the owner of Lot 38 in Section J; tombstone inscriptions from the Bodden monument in Section J; and, information from “The Dutchess County Commemorative and Biographical Record” (J. H. Beers & Co., Chicago, 1897), Eliza and Washington both died at age 2. They were the children of William and Elizabeth (Wilson) Bodden.

Born 1813, William Bodden was a native of Scotland who came to America with his father at the age of four (4).  Bodden came to the Town of Poughkeepsie in 1830 and settled on his 130 farm near Camelot where he specialized in raising fruit. He was a consistent member for 65 years of the Washington Street Methodist Episcopal Church. In politics he was a Republican. At the time of his death at age 84, he was survived by his widow and nine (9) children. His sons served as pall bearers at his funeral

“The Poughkeepsie Eagle” Saturday, December 10, 1853 reported “The first interment in the new Cemetery was made on Sunday last.  It was the child of Mr. Peters, noticed under the obituary head.” as follows: “1st inst, in this village, Caroline J., only daughter of Daniel and Ellen Peters, aged 3 years 2 months 17 days.” (Note- “1st inst”. refers to the 1st day of the current month of publication – the usage of the era – inst = instant abbreviated)

To date little has been found on Daniel and Ellen Peters other than what is found in the 1850 Federal Census for Poughkeepsie enumerated on August 6, 1850 which lists Daniel as a “baker” age 21 born New York and, Ellen as age 20, also born New York.

What is known from cemetery office records is the plot owners were Daniel and Jarvis J. Peters.  Also buried in the plot are Charity H. Briggs died 1877, Esther H. Swan died 1856, Melinda Peters died 1901, and Rachel Higgins died 1872. The most interesting to this writer is the small individual monument for little Caroline still exists today.  Although the inscription has worn away with time, the monument for this little flower stands in the shadow of a large evergreen and the individual monuments for the four (4) women interred with Caroline. Caroline’s grave is well guarded.

The first three (3) interments in Poughkeepsie Rural Cemetery were all little flowers gone too young, but not forgotten.

Prepared for The Friends of Poughkeepsie Rural Cemetery
by Virginia A. Buechele, October 17, 2009 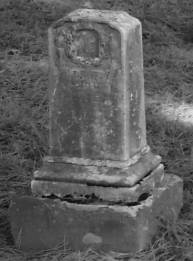 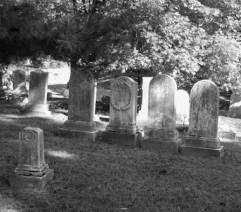 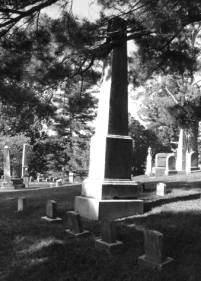